Phil and Melinda found inspiration for their new house in the surrounding farms and landscape. “We wanted farmhouse-style architecture with a wrap-around porch,” explained Melinda. “So, we explored the idea of what makes a farmhouse.”

They thought about materials – wood siding, timber framing, metal roofing – and forms – open porches, gabled roofs. They also wanted a more manageable scale than most suburban homes. Energy savings were top of mind. “We were naturally interested in it,” Melinda said. “Why heat our house for up to $1000 per month when we could use better materials to reduce energy costs.” Phil spearheaded energy efficiency research, identifying materials such as ICFs (Insulating Concrete Forms), which combine reinforced concrete with rigid thermal insulation as a substrate for walls, floors, and roofs.

As they considered ideas for a simple, modern, and efficient farmhouse, they scoured the internet for house plans. “We found a cute Craftsman-style house with a front porch,” Melinda described. This became the original design concept, until their commitment to Passive House principles shifted the process (more on that later).

The final design puts a modern twist on the traditional farmhouse. All of the living spaces are contained within a compact rectangular footprint, wrapped on three sides by open porches. An attached two-car garage extends to the fourth side. The first floor includes an open-concept living room, dining area, and kitchen along with a mudroom, laundry, and powder room. The second floor includes three bedrooms and two full bathrooms. An unfinished basement provides room to expand in the future. 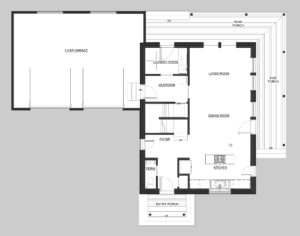 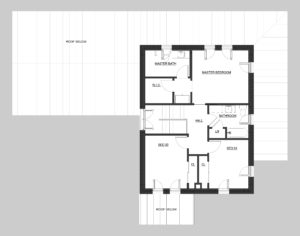 Board-and-batten style vertical metal siding clads most of the exterior. Horizontal wood siding finishes the protected walls beneath the timber-framed porches. The roofs are capped with standing-seam metal roofing.

The house clocks in at a compact 885 gross square feet per floor. 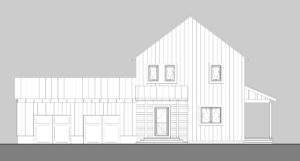 A Wolf in Sheep’s Clothing

According to architect Ilka, the house’s traditional aesthetic belies its high performance. “It’s almost like a wolf in sheep’s clothing,” she says. The visual appearance makes the house very accessible to people who see comfort in the traditional gabled roof and farmhouse style; when you ask most people to draw a house, these are the forms they reproduce. 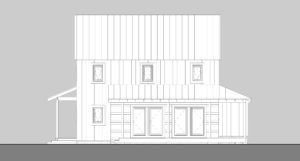 But efficiency is also achieved by sticking to this simple, compact form with shade-giving porches. High-tech systems and a super-insulated, airtight, and thermal bridge-free envelope are unexpected behind the traditional façade. The Passive House will function, according to Ilka, “almost like a high-tech spaceship.”